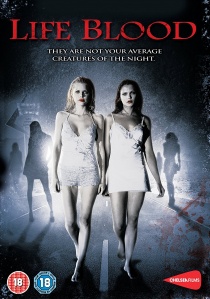 Vampyres: Daughters Of Darkness meets Thelma and Louise in Life Blood, released on DVD by Chelsea Films on 11th October 2010, an infernal, blood-soaked romp of a horror movie concerning a pair of hot lipstick-lesbian vampire lovers appointed by an unfeasibly alluring and provocative God (a woman, of course) to rid the world of evil by sucking the lifeblood from any wrongdoers unfortunate enough to cross their path.

It's New Year's Eve, 1969, and lesbian lovers Brooke (Monk) and Rhea (Lahiri) are celebrating the occasion at a swinging party in LA. Unfortunately, the evening's festivities take a terrible turn when Brooke stumbles into the bathroom and interrupts Hollywood A-lister Warren James (Justin Shilton) attempting to rape a young fan (Taylor-Compton) and promptly stabs him to death with one of the girl's hair sticks. Escaping to the desert in their car, Brooke and Rhea encounter God herself (Lindvall), who offers to turn the pair into immortal, vampiric angels of death, destined to wander the earth destroying evil wherever they find it.

Exactly forty years later to the night, on New Year's Eve 2009, the lovers arise from the sub-desert cocoons in which they have been sleeping ready to begin their divine mission. But, enamoured with her newfound power and immortality, Brooke decides that satisfying her constant bloodlust is much more fun than doing God's work and goes on a horrifying killing spree that only Rhea can end.

UHD
Almost four decades after he drew first blood, Sylvester Stallone is back as John Rambo in a deadly journey of vengeance as Rambo: Last Blood is released on DVD, Blu-ray and 4K UHD 13th January 2020 ... END_OF_DOCUMENT_TOKEN_TO_BE_REPLACED
Top PicksView