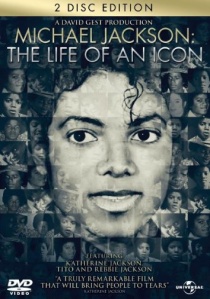 Prepare to go behind the headlines as producer and television star David Gest, Michael Jackson's mother Katherine, brother Tito, sister Rebbie and more than fifty friends, peers and associates share intimate and fascinating stories about the singer's celebrated life. Released on DVD and Blu-ray on October 31st 2011 from Universal Pictures (UK) and featuring performance footage as well as never-before-seen family photography, Michael Jackson: The Life of an Icon is a powerful behind-the-scenes account of the star's life, providing fresh insight into his early years with the Jackson 5, his rise to global solo-stardom through to the final moments before his sudden death in 2009.

Directed by Andrew Eastel and produced by Michael Jackson's close childhood friend David Gest, Michael Jackson: The Life of an Icon gives Katherine Jackson the first chance to tell her side of the story about Michael's upbringing in Gary, Indiana, his relationship with father Joe, her support for her son during the court cases he challenged and her thoughts on the life he faced afterwards. Rebbie Jackson, Michael's eldest sister, gives a very rare interview and recounts the star's childhood growing up in Gary, Indiana, as well as his difficulties with father Joe, his extraordinary bond with mother Katherine and his decline in later years. Gest's other best friend, Michael's brother, Tito, provides an in-depth look into Jackson's history and what his mother and family went through during the sensational molestation trial in 2005.

Michael's mother Katherine says, "Michael Jackson: The Life of an Icon is a truly remarkable film that captures the true character, wit and sensitivity of my son. Producer David Gest takes you on an emotional roller coaster that will bring people to tears as well as really understand who the man behind the music was and is".

Producer and close friend David Gest says, "I have tried to show Michael in a truly unique light. I have spent the past fifteen months travelling the world interviewing people who were most important in his life. I believe this film will entertain and educate in equal measures about who the real Michael Jackson was. I hope this will serve as a lasting testament to the compassion and love that he had for all mankind. He was a very complex individual and this film reveals the many different facets of his personality".

Producer, narrator and best friend to Michael Jackson, David Gest has pieced together the most important facts about Jackson's life based on unseen first-hand accounts he has recently recorded with an important group of people who knew the star well. In addition to celebrating his many achievements as the biggest selling artist of all-time, the film will finally answer some of the speculation surrounding Jackson's life.

Also included in the show is rare, in-studio and live television performance footage of Michael Jackson and the Jackson 5 as well as unforgettable original music from the Motown period by Michael, the Jackson 5 and other artists who Jackson respected and was influenced by. The soundtrack includes more than twenty-one classic tunes.

HotDVDBDUHD
From the acclaimed director of fan-favourites such as Baby Driver, Shaun of the Dead and The World's End comes the tribute to 1960s London in Last Night In Soho, available to own on DVD, Blu-ray and 4K UHD 31st January 2022 from Universal Pictures (UK). END_OF_DOCUMENT_TOKEN_TO_BE_REPLACED
Top PicksView