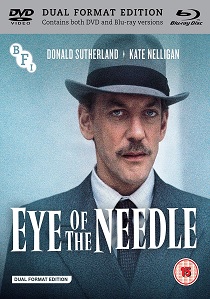 Donald Sutherland (Don't Look Now) and Kate Nelligan (The Prince of Tides) play star-crossed lovers torn between passion and allegiance in this heart-wrenching World War ll-set thriller, played out against the blitz-scarred 1940s backdrop of England and the windswept hills of the Scottish islands.

En route to the Fatherland with secrets that will stop the D-Day invasion, ruthless spy 'The Needle' (Sutherland) finds himself shipwrecked on the remote Storm Island. Here he becomes involved in a perilous affair with the beautiful, but lonely Lucy (Nelligan), who lives there with her bitter, crippled ex-RAF husband, David (Christopher Cazenove). But can the fierce passion of illicit love survive the bitter realities of war?

The Eye of the Needle is re-released on dual-format DVD and Blu-ray 24th September 2018 from Bfi.