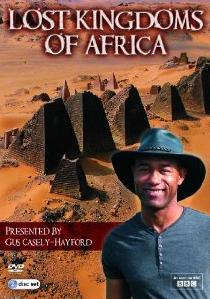 Presented by Dr. Gus Casely-Hayford, This extraordinary and eye-opening, four-part series reaches back in time to explore realms that rivaled Egypt, buildings as inspiring as medieval cathedrals and art that speaks to us across the centuries. Lost Kingdoms of Africa, released on DVD from 22nd August 2011 from Acorn Media, casts new light on a long-neglected area of the world's cultural heritage.

Nubia - Starting in the desert north of Khartoum, we journey to the ancient sites of Kerma Jebel Barkal and Meroë to explore a long-lost kingdom that may have fallen victim to climate change.

Great Zimbabwe - Shrouded in mystery, the ruins of Great Zimbabwe rise from an unlikely spot in Africa's interior. We trace an ancient gold-trading route inland from the eastern coast and explore the city that served as its source.

Ethiopia - Did the emperors of Ethiopia really descend from the Biblical King Solomon and the Queen of Sheba? We survey Judeo-Christian influences in the land's art, language and change architecture which date back centuries.

West Africa- The magnificent Benin bronzes in the British Museum inspire a quest for their origin. The search takes us to modern-day Nigeria and Mali, where the art of fi ne metalworking has thrived for generations.

UHD
With all the heart and humour audiences expect from Walt Disney Animation Studios, Big Hero 6, released on 4K UHD for the first time 30th August 2021 and exclusive to Zavvi, introduces you to a lovable robot who will change ... END_OF_DOCUMENT_TOKEN_TO_BE_REPLACED
Top PicksView