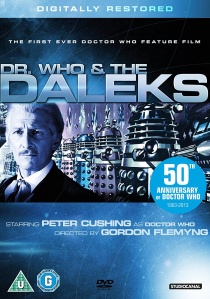 NewsScience Fiction
News Article Go back to homepage
Digitally re-mastered and out on Blu-ray for the first time on 27th May 2013 by StudioCanal, Dr Who And The Daleks was the first big screen film adaptation the iconic sci-fi hero and the first time Doctor Who ever seen in colour!
Geoffrey Toone, Barrie Ingham, Roberta Tovey, Jennie Linden, Roy Castle, Peter Cushing
Gordon Flemyng
Joe Vegoda, Milton Subotsky, Max Rosenberg
StudioCanal
1 hour 22 minutes
27/05/2013
#DrWhoAndTheDaleks
Thank you for supporting DVD365.net when you order using the link(s) below. As an Amazon Associate we earn from qualifying purchases
Buy DVD
Buy BD
Information

Digitally re-mastered, and out on Blu-ray for the first time on 27th May 2013 by StudioCanal, directed by Gordon Flemyng, Dr Who And The Daleks was the first big screen film adaptation of British TV's most iconic sci-fi hero and was the first time Doctor Who ever seen in colour!

British film legend Peter Cushing plays everyone's favourite Timelord and having invented the TARDIS, a strange machine capable of travelling into other dimensions, the Doctor and his three young accomplices set forth on a quest through time and space.

Their journey takes them into the dark, undiscovered depths of the universe and to the planet of Skaro. A primitive world devastated by nuclear war and populated by two warring species, a peaceful tribe known as Thals and a life form heavily mutated by radiation, encased in protective machines. A merciless force of destruction known as The Daleks!

UHD
A 13-year-old girl named Meilin turns into a giant red panda whenever she gets too excited in Disney and Pixar's 25th feature film Turning Red, released on DVD, Blu-ray and 4K UHD 2nd May 2022 from Walt Disney Home ... END_OF_DOCUMENT_TOKEN_TO_BE_REPLACED
Top PicksView