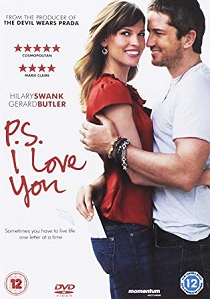 Based on the best-selling book of the same name by Cecelia Ahern, whose own Irish roots infuse the story with oodles of gaelic charm, much to the delight of audiences in the UK and the Republic of Ireland, PS I Love You was written and directed by Academy Award® nominee Richard LaGravenese and produced by Wendy Finerman of The Devil Wears Prada fame.

Available to rent and buy on DVD on 12th May 2008 courtesy of Momentum Pictures, this must-own DVD is an irresistibly charming romantic comedy about the enduring power of love, when sometimes the only thing left to say is PS I love you. A tear jerker that will, in equal measure, have you laughing out loud, you'd better start stocking up now on the tissues as your heart strings are tugged for all they're worth. As the director states, "This is a love story, but it's also a journey of self-discovery. It's a story about friendship and family and about how love can be so strong that it stretches across life and death."

Holly Kennedy (Hilary Swank) is beautiful, smart and married to the love of her life - a passionate, funny and impetuous Irishman named Gerry (Gerard Butler). So when Gerry's life is taken by an illness, it takes the life out of Holly. Nobody knows Holly better than Gerry, so it's a good thing he planned ahead. Before he died, Gerry wrote Holly a series of letters that will guide her, not only through her grief but in rediscovering life. The first message arrives on Holly's birthday in the form of a tape recording from Gerry ordering her to get out and celebrate!

In the weeks and months that follow, more letters from Gerry are delivered in surprising ways, each sending her on a new adventure and each signing off in the same way: PS I Love You. Holly's protective mother (Kathy Bates) and best friends (Lisa Kudrow, Gina Gershon) worry that this link with the past is stopping her from moving on, but with Gerry's words as her guide Holly embarks on a touching, exciting and hilarious journey of rediscovery.

DVD
Inspired by real-events, The Serpent, released on DVD 22nd February 2021 from ITV Studios Home Entertainment, tells true story of how Charles Sobrajh, one of the most elusive & wanted criminals was ... END_OF_DOCUMENT_TOKEN_TO_BE_REPLACED
Top PicksView

"It ain't what you go through; it's how you choose to grow as a person through it."