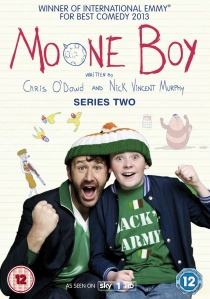 Chris O'Dowd (Bridesmaids, The IT Crowd) co-writes and stars in the second series of critically acclaimed comedy series Moone Boy, which comes to DVD on 31st March 2014 following its run on Sky 1 HD, courtesy of BBC Worldwide. Moone Boy (Series 1 -2) box set will also be available to purchase on the same day.

The second series of the semi-autobiographical comedy, which follows the antics of 11-year-old Martin Moone (David Rawle) and his imaginary friend Sean Murphy (Chris O'Dowd), opens during Ireland's historic football victories and ties at the World Cup in the summer of 1990; when not even a family holiday to a very wet Donegal can dampen Martin's hope for the team - or his determination to escape that "foreign land" and get back on Boyle soil.

After the summer holidays it's a time of great change for Martin when he starts at his new secondary school and promptly develops a crush on his "beautiful, mental" art-teacher, Miss Tivnan (Amy Huberman); whom he tries to impress with his slick moves at the school dance. But true love truly blossoms when a group of Travellers move into the field next to the Moone home - and Martin meets the lovely Majella.

Other highlights from the series include an epic golf battle between Liam and his old rival, Kevin 'The Leech' Leech; a religious-themed stag party; a Halloween adventure on a river raft that leads to an encounter with the mysterious Island Joe (Pat Shortt); and a St. Patrick's Day parade in the middle of Boyle that none of the Moones will quickly forget.

Moone Boy is set and partly filmed in Boyle, County Roscommon, which is the town where Chris O'Dowd grew up, and features animated elements designed and supplied by Kilkenny-based 'Cartoon Saloon' (Skunk Fu, The Secret of Kells).