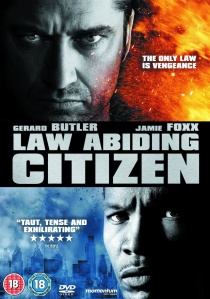 Get ready for the biggest action film of the year as Gerard Butler (300, RocknRolla, Gamer) and Jamie Foxx (Collateral, The Kingdom, Miami Vice) tear up the screen and the criminal justice system in Law Abiding Citizen. This pulsating, brutal roller-coaster of big explosions, revenge and clever twists showcases an amazing cast at the top of their game. Momentum Pictures will release the original theatrical cut on DVD and an exclusive to Blu-ray Director's Cut on 12th April 2010.

How Do You Stop A Killer Who Is Already Behind Bars?

Clyde Shelton (Butler) is a family man whose wife and daughter were brutally murdered during a home invasion. When the killers are caught, Nick Rice (Foxx) a hotshot young Philadelphia prosecutor is assigned to the case. Against his will, Rice is forced to offer one of the suspects a light sentence in exchange for testifying against his accomplice. Fast forward ten years. The man who got away with murder is found dead and Shelton coolly admits his guilt. He then issues a warning to Rice: either fix the justice system, or key players in the trial will die. Soon Shelton follows through on his threats, orchestrating a string of ingenious assassinations from his jail cell. Now Rice finds himself in a desperate race against time facing a deadly adversary who always seems to be one step ahead.

Law Abiding Citizen is jam-packed with fantastic special features including behind-the-scenes and visual effects featurettes. The perfect film to see on Blu-ray, with explosions and chase scenes that transport you to the centre of the action, this format contains the exclusive Director's Cut with extended, more graphic scenes of action and brutality. Butler and Foxx deliver explosive performances as they face-off against each other in this adrenalin-fuelled action fest. If you're a fan of thrillers with great twists, then this film is definitely one for your collection.

HotDVDBD3D-BDUHD
The surviving members of the resistance face the First Order once again, and the legendary conflict between the Jedi and the Sith reaches its peak as Star Wars: The Rise of Skywalker is released on DVD, Blu-ray, 3D Blu-ray and 4K UHD 20th April 2020 from Walt Disney Home Entertainment. END_OF_DOCUMENT_TOKEN_TO_BE_REPLACED
Hot PicksView

New technologies and social communities allow us to record, post and comment on every second of our lives, sharing our every emotion and opinion with the world, no matter how mundane. For three high school classmates who suddenly gain superpowers from a mysterious substance, the chronicle of their ordinary lives is about to take on ...