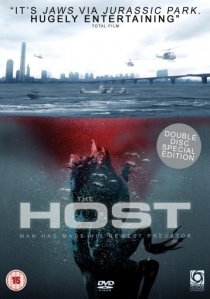 From the director of Memories of Murder comes Bong Joon-Ho's The Host, released by Optimum Asia on 5th March 2007, a fantasy monster movie that expertly mixes humour and horror. On its release in its native Korea it broke box office records, taking the opening weekend record and the highest single-day admissions ever.

The Host showed in the Director's Fortnight section of the 2006 Cannes Film Festival and has been compared in its scare-quotient to both Jaws and Alien.

On the banks of the Han River, a crowd gathers to watch an unidentified object hanging onto a bridge. In an instant, the object reveals itself as a terrifying creature, turning the riverbank into a gruesome sea of blood.

Amid the chaos, a little girl, Hyun-seo is snatched up by the creature right before her father, Gang-du's eyes. After receiving a mobile phone call from his daughter confirming that she has miraculously survived, the once-ordinary citizen Gang-du and his family decide to wage war against the creature, despite both the Korean authorities' and U.S. army's every efforts to stop them.

Combining state of the art visual effects from the team behind Superman Returns, Harry Potter and the Goblet of Fire and Sin City with the dark and offbeat humour synonymous with Korean cinema, The Host is one of the most original monster movies to emerge for decades.

DVD
Fast forward to the 1980s as Wonder Woman's next big screen adventure finds her facing a wide array of foes including Max Lord and The Cheetah as Wonder Woman 1984 flies in on Blu-ray and 4K UHD 22nd ... END_OF_DOCUMENT_TOKEN_TO_BE_REPLACED
Top PicksView