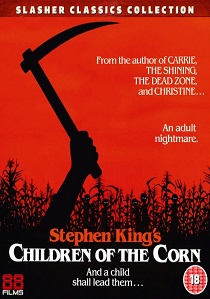 Adapted from a popular Stephen King short story, the original Children of the Corn (1984) became one of the most successful of the legendary author's page-to-screen adaptations. This hit horror sickie headlines Linda Hamilton (The Terminator) and Peter Horton (TV's Thirtysomething) as a travelling couple who unwittingly become trapped in the fictional town of Gatlin, Nebraska, and find themselves stalked by a creepy clan of young cultists. No adult is allowed to survive in Gatlin or else, their prophecy predicts, the harvest will collapse. Suffice to say, all hell soon breaks loose (literally) and demonic entities ensure that Hamilton and her husband are in for a long night...

Co-starring popular genre face Courtney Gains (The 'Burbs) and given a malevolent mid-western touch by director Fritz Kiersch (Tuff Turf), Children of the Corn, re-released with a newly commissioned feature length documentary on DVD and Blu-ray by 88 Films on 8th February 2016, remains one of the most spine-tingling terror titles of the 1980s.