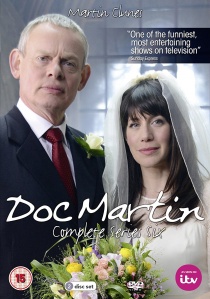 Even on his own wedding day, Dr. Martin Ellingham (Clunes) can't raise a smile; but following a suitably disaster-filled honeymoon, he and Louisa (Catz) must learn to live together, raise a child, and manage both their careers as best they can. It's a big adjustment for them, especially Martin, unaccustomed as he is to clutter and noise, but even he's not as picky as their OCD 'manny'.

Factor in Doc Martin's usual string of offbeat patients - the hypochondriac, the hoarder and a clumsy constable prone to self-inflicted injuries - and Martin is soon even more ill-tempered than usual. With the return of his crippling blood phobia, and his long unseen mother showing up out of the blue, Martin turns for advice to his aunt Ruth, perhaps the sanest person in Portwenn-but it may already be too late.

Doc Martin was created by Dominic Minghella and has been entertaining viewers since the first series aired in 2004, winning Best TV Comedy Drama at the British Comedy Awards in the same year, it still enjoys audience figures in excess of seven million.