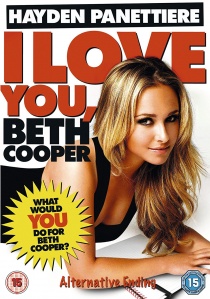 NewsComedy
News Article Go back to homepage
Based on the book of the same name by Larry Doyle, buy your loved one a comic treat this Valentine's Day with the hilarious I Love You, Beth Cooper, released on DVD on the 8th February 2010 from Twentieth Century Fox.
Shawn Roberts, Lauren Storm, Lauren London, Jack Carpenter, Paul Rust, Hayden Panettiere
Chris Columbus
Larry Doyle, Chris Columbus, Jennifer Blum, Michael Barnathan
Twentieth Century Fox Home Entertainment
1 hour 42 minutes
08/02/2010
Thank you for supporting DVD365.net when you order using the link(s) below. As an Amazon Associate we earn from qualifying purchases
Buy DVD
Information

Buy your loved one a comic treat this Valentine's Day with the hilarious I Love You, Beth Cooper, released on DVD on the 8th February 2010 from Twentieth Century Fox. Based on the book of the same name by Larry Doyle, (writer of The Simpsons, Beavis and Butthead) and directed by Chris Columbus (The Goonies, Gremlins), I Love You, Beth Cooper is a sexually-charged comedy starring Hayden Panettiere (Heroes) as an enigmatic cheerleader who makes dreams come true for one of her many admirers.

High School geek Denis Cooverman (Paul Rust; Inglorious Basterds, Paper Heart) is a conscientious student who has spent his high school years concentrating on his studies while the cool kids had all of the fun. Egged-on by his friends, Denis uses his valedictorian speech to launch an attack on his classmates, and when he gets carried away on the podium Denis shockingly mutters five words which change his graduation night beyond his wildest dreams: "I love you, Beth Cooper".

Flattered by Denis' confession Beth turns up at his house party later that evening to give him a night he won't forget. Denis' night is unforgettable, but not quite for the reasons Beth intended... A coming-of-age comedy with a twist, I Love You, Beth Cooper on DVD includes a selection of deleted scenes and a surprise alternative ending. Cuddle up with your Valentine and enjoy, this February!