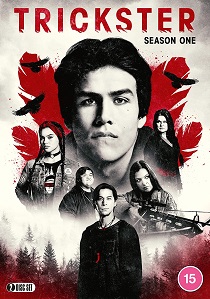 Jared is an Indigenous teen in the town of Kitimat, a coastal town in Northern British Columbia, struggling to keep his dysfunctional family above water. He holds down an after-school job and cooks ecstasy on the side to support his separated parents - partying mum Maggie, who self-medicates an undiagnosed mental illness, and unemployable dad Phil, who has a painkiller addiction and a new girlfriend.

But when Jared starts seeing strange things - talking ravens, doppelgängers, skin monsters - his already chaotic life is turned upside down. At first, he thinks hes losing his mind, but to his relief, and terror, the supernatural events are all too real. It turns out theres more than meets the eye to the place Jared grew up, the people he loves - and to Jared himself.

Hes inherited magical abilities from his mum, and from someone Jared never even knew existed - his real dad, Wade.

Trickster: Season 1 is released on DVD and Blu-ray 11th January 2021 from Dazzler Media.

DVD
In Brian And Charles, released on DVD and Blu-ray 10th October 2022 from Mediumrare, an inventor lives alone in a remote village in the countryside, inventing useless things out of found objects in his garage. That is until ... END_OF_DOCUMENT_TOKEN_TO_BE_REPLACED
Top PicksView