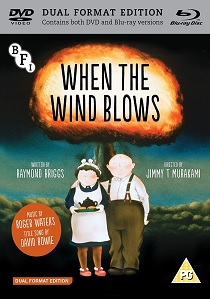 NewsAnimationDrama
News Article Go back to homepage
Adapted by Raymond Briggs from his best-selling book, for the first time on Blu-ray, the masterpiece of British animation When the Wind Blows is released in dual-format DVD and Blu-ray 22nd January 2018 from BFI.
Sir John Mills, Dame Peggy Ashcroft, Robin Houston
Jimmy T Murakami
John Coates
BFI
1 hour 24 minutes
22/01/2018
#WhenTheWindBlows
Thank you for supporting DVD365.net when you order using the link(s) below. As an Amazon Associate we earn from qualifying purchases
Buy DVD
Buy BD
Information

Jim and Hilda Bloggs (Sir John Mills and Dame Peggy Ashcroft) are a middle-aged couple, who believe that the British government is in control as they prepare for Nuclear War. When the countdown begins they roll up their shirtsleeves and follow government guidelines that were actually distributed to households around Britain in the 1970s. They paint their windows white, build a fortress of doors and pillows, take the washing in and put away two packets of ginger nuts, one tin of pineapple chunks and a good supply of tea.

This cautionary tale is both humorous and macabre in its consideration of one of the most horrific possibilities of modern life. When the Wind Blows is a story about love, tenderness, humanity and hope.

Adapted by Raymond Briggs (The Snowman) from his best-selling book, When the Wind Blows, released in dual-format DVD and Blu-ray 22nd January 2018 from BFI, features an original soundtrack by Roger Waters, and title song by David Bowie.