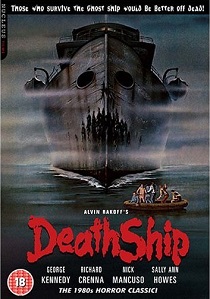 One of the great and most fondly remembered "lost" classics of 1980s horror, Death Ship finally gets its long awaited and first ever UK DVD released by Nucleus Films on 26th March 2007.

Unknown to the vacationing passengers partying the night away aboard a luxury ocean liner, their holiday is about to come to a very abrupt and watery end. Veiled in the darkness of the open sea, a mysterious vessel is approaching on a deadly collision course with the cruise ship. Despite a desperate attempt to avert disaster, the warning comes too late and the liner goes down with all passengers and crew on board save for nine survivors, including the ship's soon-to-be-retired captain, Ashland (George Kennedy), his successor Trevor Marshall (Richard Crenna), and Marshall's wife (Sally Ann Howes) and two young children. Left adrift at sea, the castaways are given a lifeline when they manage to clamber aboard a passing freighter.

But, once aboard the obviously derelict vessel, they soon realise they may be facing an even worse fate than their late fellow passengers. The ship is revealed formally to have been a floating Nazi interrogation unit and now appears to host a malevolent presence intent on destroying its newly arrived guests in the most gruesome and terrifying ways imaginable.