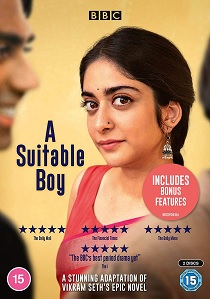 From Vikram Seth's epic novel, the stunning new adaptation for BBC One of A Suitable Boy is released on DVD 26th October 2020 from BBC Worldwide.

It's 1951, and newly independent India is breaking free of its past. Lata is a spirited young student. Her mother wants to find her a husband - a suitable boy. As Lata meets potential matches, she's torn between romance and responsibility.

Meanwhile, her headstrong friend Maan defies his father as he falls in love with a glamorous courtesan. Both are determined to decide their own future. And, in a country still haunted by the horrors of Partition, anything could happen.

This sumptuous story of passion, politics and romance is the first screen adaptation of Vikram Seth's classic novel, written by Andrew Davies, and directed by acclaimed filmmaker Mira Nair.

BD
After moving to a new town, two brothers discover that the area is a haven for vampires as the classic The Lost Boys is released on 4K UHD 20th September 2022 from Warner Home Video. END_OF_DOCUMENT_TOKEN_TO_BE_REPLACED
Top PicksView