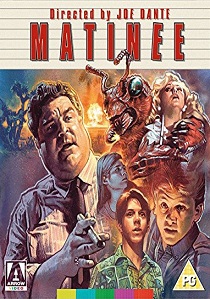 Half man... Half ant... All terror! So says the advertising campaign for Mant!, the latest low-budget schlock-horror classic from cigar-chomping producer Lawrence Woolsey (John Goodman, The Big Lebowski), who more than makes up for his films' lack of production values by festooning them with gimmicks that would turn even William Castle (The Tingler) green with envy.

But the most potent gimmick of all is accidental: Woolsey schedules a sneak preview of Mant! in Key West, Florida, in October 1962, unaware that the Cuban missile crisis is about to flare up. Will the threat of genuine nuclear war distract the locals from the movie, or will they find it doubly terrifying?

Directed by the legendary Joe Dante (The Burbs), Matinee, released on Blu-ray by Arrow Films on 12th September 2016, isn't just an affectionate love-letter to the sci-fi and horror films that he grew up with in the 1950s and 60s, it's also a witty and intelligent exploration of the way that the most successful genre films worked by preying on the very real fears of their audiences about everything from Soviet satellite launches to atomic mutation.

BD
Pixar Animation Studios presents Cars, the high-octane adventure comedy that shows life is about the journey, not the finish line, zooming in for the first time on 4K Ultra HD 19th July 2021, ... END_OF_DOCUMENT_TOKEN_TO_BE_REPLACED
Top PicksView