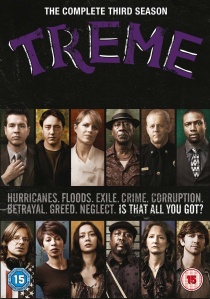 From the award-winning writers of The Wire, HBO Home Entertainment announces the 30th September 2013 DVD and Blu-ray release of The Complete Third Season of the two-time Emmy® and Grammy® Awards nominee Treme, following its broadcast on Sky Atlantic.

Season three begins 25 months after Hurricane Katrina. Crime and corruption are up, culture is being trampled, and the people who matter - the workers, families and dreamers who live here - have had enough.

HBO's drama series Treme revisits the musicians, chefs, Mardi Gras Indians, and other familiar New Orleans characters who continue to rebuild their lives, their homes and their culture in the aftermath of the 2005 hurricane that caused the near-death of an American city. The series' focus is still on ordinary people, but they no longer accept their lack of influence on the institutions that have controlled the city.