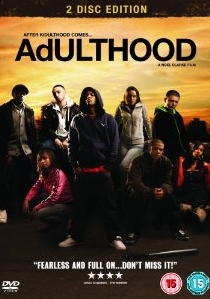 From award-winning director, writer and actor Noel Clarke comes the box-office hit Adulthood, the powerful and moving sequel to 2006's acclaimed Kidulthood. Set against the backdrop of an unseen London underbelly, Adulthood delivers a raw, hard-hitting reflection of what life is like for young people in a culture where sex is currency, drugs are easy to come by and violence is a way of life. Adulthood is released to buy and rent on two-disc DVD & Blu-ray on 13th October 2008 from Pathé Distribution Ltd.

Both the DVD & Blu-ray are packed with fantastic special features including in-vision and audio commentaries, music videos, deleted scenes, outtakes and nine featurettes. The featurettes take you further into Adulthood, letting you behind-the-scenes on the Bashy video shoots, the cast and crew wrap party, and the premiere and after-party. The Blu-ray disc will include a new 'text me' option that sends an on-screen message during the film, giving you the option of watching a special feature relevant to that particular part of the film. The in-vision commentary includes a function that lets you skip between the filmed commentary and the feature.

Recently hailed by The Independent as one of the ‘20 Most Influential People in British Film', Noel Clarke (Dr. Who) is an Olivier Award-winning actor and recipient of the 'Best Screenplay' accolade at the Dinard British Film Festival for Kidulthood. Joining Noel Clarke from the original film are actors Adam Deacon, Femi Oyeniran, Red Madrell, Cornell S. John and Madeleine Fairly, and new additions to the cast include Danny Dyer (The Football Factory; The Business) and Scarlett Alice Johnson (EastEnders). The film is accompanied by a cutting-edge urban soundtrack which includes established names like Dizzee Rascal, Wiley, and Lethal Bizzle featuring Kate Nash, alongside rising talents Bashy, Sway and Plan B.

After six long years, Sam Peel (Clarke) is released from jail for killing Trife, and forced to confront the people he hurt the most, and soon realises that life is no easier on the outside than it was on the inside. Some have moved on, others are stuck with the repercussions of his actions that night, but one thing's for certain - everyone has been forced to grow up.

During his 24 hour journey through West London, Sam struggles to deal with his sorrow and guilt and something else he didn't expect - those seeking revenge. As he's pursued by a new generation of bad boys, Sam sets about trying to get the message across to his pursuers that they should stop the violence, much like Trife tried to tell him all those years ago. As Sam battles to end the cycle of violence he started, his new journey is one of discovery, both about the world he came from and the new one he's trying to create. Can Sam make something positive from the destruction he caused or will his journey into Adulthood end here?