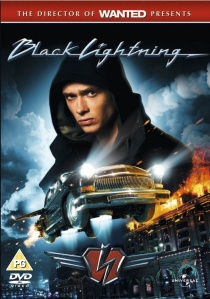 When student Dima is bought a car for his birthday he thinks the answer to all of his problems has finally arrived. But when the car turns out to be a beaten up old Volga his excitement turns into embarrassment until he discovers the car's flighty secret. Armed with the car's hidden technology that harks back to the Cold War, Dima revels in his new-found power of flight and reinvents himself as the mysterious Black Lightning, crime fighter, Moscow's saviour and arch-nemesis of a corrupt industrialist with his eyes on domination at any cost...

Packed with the incredible visual effects fans of Bekmambetov have come to expect, Black Lightning is this year's must-see superhero adventure; having already trounced both Harry Potter and Twilight at its domestic box office in 2009. With thrills, spills and a superbly engaging storyline set against the stunning Moscow skyline Black Lightning is a cult classic in the making and the perfect family night in too thanks to a brand new English language soundtrack.

Effortlessly joining the echelons of other turbo-charged superhero debuts, Black Lightning is a fantastic romp to rival the best Hollywood can produce. And with fantastic bonus material including a Making Of featurette and plenty of deleted scenes, it's an adventure fans will fly back to time and again...