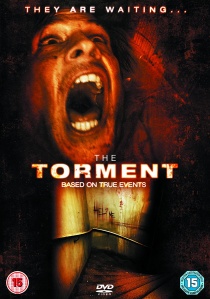 NewsHorror
News Article Go back to homepage
Set for DVD release on 9th August 2010 courtesy of Momentum Pictures, the supernatural shockumentary The Torment about a demonic presence in a young couple's home will leave you begging for anything other than sheer realism.
Nicholas Shaw, Zoe Richards, Paul McGuinness, Francesca Fowler, Giles Alderson
Steve Isles, Andrew Cull
Steve Isles, Patrick Ewald, Shaked Berenson
Momentum Pictures
1 hour 27 minutes
09/08/2010
Thank you for supporting DVD365.net when you order using the link(s) below. As an Amazon Associate we earn from qualifying purchases
Buy DVD
Information

Ever since the likes of Blair Witch hit the scene, the horror genre has hugely benefited from the documentary approach. It provides a gruesomely realistic truthfulness to the story being told and The Torment is a prime example. Set for DVD release on 9th August 2010 courtesy of Momentum Pictures, this supernatural shockumentary about a demonic presence in a young couple's home will leave you begging for anything other than sheer realism.

A tale of demonic possession, strange goings-on, and human beings tortured to the brink of insanity by forces we don't fully understand, The Torment portrays an explanation that defies logic as the hand held, point-of-view shooting puts the audience into the characters heads. Key to the action is the fact that the haunting isn't attached to a location but to the central character himself, David O'Reilly.

The action unfolds as David turns up in the middle of the night at the London flat of his friends Alex and Kate with the explanation that his girlfriend has left him. Feeling sorry for him, they let David stay, but are totally unaware of the real reason he's turned up - for two weeks he's seen and heard things that have terrified him so much, he's fled to what he hopes will be a safe haven. The chilling story unfolds as the haunting continues over the next couple of nights with harrowing results.

Inspired by a real life domestic incident in which the police were called to a block of converted Victorian flats where a perplexing and disturbing scene confronted them, The Torment shockingly displays the fear the characters see as they try to escape the horrors they are faced with.