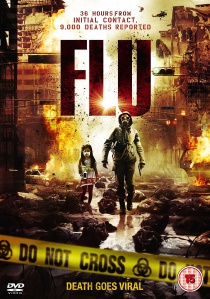 When a shipping container carrying illegal immigrants is opened in Bungang, South Korea, all of the occupants are found to be dead. All, that is, except one man who quickly flees the scene. One of the traffickers who had been in contact with the escapee admits himself to the hospital with flu-like symptoms. Lockdown is declared on the city as it becomes clear there is a deadly strain of H5N1 bird flu infecting its people.

Who was the uninfected man and where did he go? Could his blood possess an antibody that could stop this deadly virus?

BD
When an alien spacecraft of enormous power is spotted approaching Earth, Admiral James T. Kirk resumes command of the USS Enterprise in order to intercept it, in the ... END_OF_DOCUMENT_TOKEN_TO_BE_REPLACED
Top PicksView