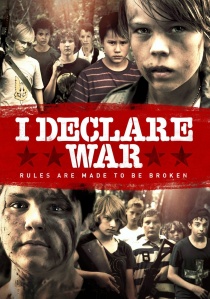 In a film by Jason Lapeyre and Robert Wilson, Kaleidoscope Home Entertainment is pleased to announce the UK release of I Declare War, which will be available on DVD from 30th June 2014.

I Declare War focuses on a group of 12-year-old friends whilst they play an innocent game of 'Capture the Flag' in the neighbourhood woods, arming themselves with nothing more than sticks, their imagination and a simple set of rules.

One afternoon the game takes on a more serious tone and the quest for victory pushes the boundaries of friendship, giving the would-be warriors a glimpse of the darker side of human nature. Will child's play turn to something more real or will these boys battle it out and win the war?