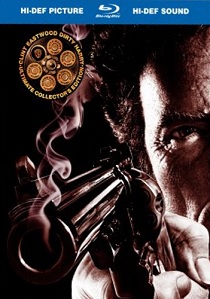 Warner Home Video will pay homage to Clint Eastwood and the films that gave birth to the modern action hero when the Dirty Harry film franchise returns to DVD and Blu-ray on 9th June 2008 with The Dirty Harry Ultimate Collector's Edition.

The Dirty Harry Ultimate Collector's Edition is a collection of all five Dirty Harry films, plus hours of all-new enhanced content, unique memorabilia, a film-inspired map of San Francisco and more - will introduce Dirty Harry to new generations of fans around the world. The landmark film Dirty Harry not only had an impact on society but also revolutionised cinematic crime drama for all time. AFI (American Film Institute) voted Dirty Harry the 17th greatest movie hero ever in AFI's 100 Years...100 Heroes & Villains.

Clint Eastwood redefined the genre of police films as well as a number of his later roles with this iconic portrayal of the straight-talking, cynical, unorthodox detective who found himself in perpetual trouble with his incompetent superiors. Harry did not operate within the frame of the law, his interest was justice. He hated bureaucracy and was deeply interested in the rights of the victim. Eastwood established the modern-day action hero and is credited with influencing and motivating a number of contemporary actors in the action/adventure genre. At the time of its release Dirty Harry caused great controversy, sparking debate over issues ranging from police brutality to victims' right and the nature of law enforcement. Dirty Harry, the film, set the tone for a number of subsequent police movies, in which the police officer is shown to care more about justice and the victim than in the rules of the establishment.

Set in San Francisco in 1971, Dirty Harry is a gritty and gripping film which follows the story of Inspector Harry Callahan (Clint Eastwood), who earns the moniker 'Dirty Harry' for his reputation of handling the dirtiest homicidal cases. The City by the Bay faces the terror of a serial killer known as Scorpio (Andrew Robinson), who viciously snipes at innocent victims and demands ransom through notes left at the scene of the crime. Callahan is assigned to the case along with his newest partner, Inspector Chico Gonzalez (Reni Santoni) to track down Scorpio and stop him. Using humiliation along with cat and mouse games against Callahan, Scorpio is put to the test by the cop with the very dirty attitude.

Magnum Force, which was released in 1973 as a sequel to Dirty Harry has Eastwood reprise his famous role as Inspector Callahan, and sees him face crooked cops and a traitorous boss as well as suffering re-assignment from homicide to stakeout duty after his handling of the Scorpio case. Callahan and his new partner, Earlington "Early" Smith (Felton Perry), are called off a case in which a man acquitted of murder is found dead along with his chauffer, lawyer and a bodyguard. Soon after, a mafia figure, and several of his family and friends are also gunned down. Then, a well-known pimp is murdered too. Callahan and 'Early' are soon re-assigned to investigate the homicides.

The Enforcer (only in UCE box set)

When a group of self-proclaimed revolutionaries threatens the city by the Bay, it's up to Harry to enforce the law. The city wants to pin the threat on black militants, but Harry isn't buying it. Unfortunately, his hunch will cost him his badge. So, when the terrorists kidnap the Mayor, Harry will have to use every tactic at his disposal to hunt them down. Like his newest partner, Kate Moore (Tyne Daly), providing him with inside help, and his connections on the street leading him to the final showdown at Alcatraz Island.

After a few of Harry's public performances in the line of duty bring him under fire, his superiors become uneasy and suggest he take some time off. When Harry's rest and relaxation continues to attract trouble, he is sent to the small town of San Paulo to investigate a homicide. It seems a body has been discovered by the Bay, complete with a ".38 calibre vasectomy". Harry's trip is supposed to be routine, but he soon finds that San Paulo is having its own share of similar killings, and Harry has a feeling that they're going to continue.

The Dead Pool (only in UCE box set)

After Harry puts one of the biggest crime bosses in San Francisco behind bars, he finds himself in the unlikely position of public hero. Now the unwanted attention is attracting the press, angry hit men out for revenge, and a killer who enjoys naming his victims. Harry will have to work fast to uncover the connection between the killings, as the list is getting closer to his own name. And Harry doesn't like being on it.

BD
A 13-year-old girl named Meilin turns into a giant red panda whenever she gets too excited in Disney and Pixar's 25th feature film Turning Red, released on DVD, Blu-ray and 4K UHD 2nd May 2022 from Walt Disney Home ... END_OF_DOCUMENT_TOKEN_TO_BE_REPLACED
Top PicksView