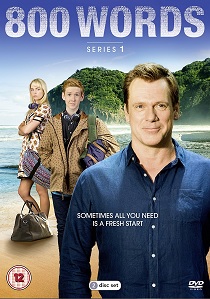 A heartwarming new Antipodean drama is set to arrive on British shores this Spring, after winning over audiences across the pond with its irresistible charm. 800 Words follows a recently widowed newspaper columnist's decision to start afresh by moving from the hustle and bustle of Sydney to a remote seaside town in New Zealand, dragging his grieving children with him. Following its UK debut on BBC One, 800 Words is set to arrive on DVD 23rd April 2018 courtesy of Acorn Media International.

George Turner's (Erik Thompson; Xena: Warrior Princess) rash and insane move to relocate himself and his reluctant son (Benson Jack Anthony; EMO the Musical) and daughter (Melina Vidler; Brock) from Sydney to the New Zealand coastal town where he spent his holidays as a child, is supposed to be a quick fix for their grief. Stuck with a run-down home, two unhappy teenagers and disaster after disaster, George soon learns that life in Weld isn't quite the paradise he had hoped for. Things take a turn for the even-worse when George gets himself and his family labelled as Aussie invaders, when the locals discover that he is writing about his new life in his column, 800 Words, for a Sydney newspaper. And then there are the single women of Weld...

Series two continues the Turner family saga after their move doesn't go according to plan. George battles to reunite his splintered family and bring his daughter home from her self-appointed exile back to Australia. George works hard to become a fully-functioning Weldonian, starting his whole life anew from getting a proper job to getting back into the game of love.

Set against a stunning New Zealand backdrop, this touching tale of death and re-birth will stay in your heart long after the credits have rolled.