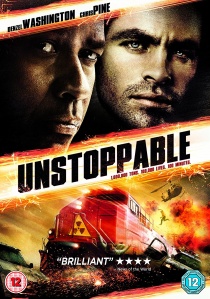 With an unmanned, half-mile-long freight train barreling toward a city, all hope rides on the shoulders of two courageous men to prevent a major catastrophe. Unstoppable is a high-intensity, action-packed thrill ride coming to Blu-ray and DVD from Twentieth Century Fox Home Entertainment on 28th March 2011.

Hang on for the ride of your life as Oscar winner Denzel Washington (The Taking of Pelham 1 2 3) and Chris Pine (Star Trek) team up for the year's most electrifying action-adventure. A runaway train, transporting deadly toxic chemicals, is barreling down on Scranton, Pennsylvania and only two men can stop it: a veteran engineer (Washington), and a young conductor (Pine).

Thousands of lives hang in the balance as these ordinary heroes attempt to chase down one million tons of hurtling steel and prevent an epic disaster. Helmed by visionary director Tony Scott (Man On Fire), this story inspired by actual events delivers excitement and suspense that are...Unstoppable!

Continue this incredible heart stopping journey on BD and DVD with a look behind-the-scenes and discover how the intense action was brought to life. Unstoppable special features extend the thrill ride with an insider's look at the fast paced adrenaline rush that took place not only on-screen but during production as well.

BD
Starring Hugh Laurie and written by David Hare, Roadkill, released on DVD and Blu-ray 9th November 2020 from Dazzler Media, is a fictional thriller about a self-made, forceful and charismatic ... END_OF_DOCUMENT_TOKEN_TO_BE_REPLACED
Hot PicksView