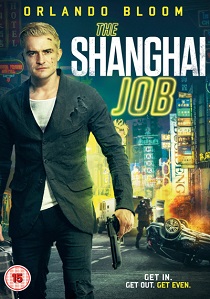 Orlando Bloom (Lord of the Rings, Pirates of the Caribbean) reinvents himself as a formidable action hero in this slick, high-stakes thriller set in Shanghai, that mixes the heist capers of The Italian Job with impressive action set pieces, and with the fighting skills from Ip Man alumni thrown in.

Washed-up private security agent Danny Stratton has been reduced to low level bodyguarding operations, after a botched job when a Van Gogh painting in his care was stolen. He gets a chance to restore his reputation when he's given the rare opportunity to escort a valuable Chinese antique out of Shanghai. In the course of the mission he is ambushed, and, with the safety of the woman he loves in jeopardy, Danny has to work with his team of experts to save her, whilst also outsmarting the devious mastermind behind the heist.

Superbly filmed in and around the striking, neon-drenched city of Shanghai, with a pulsing soundtrack (including Katy Perry's song Roulette) and jaw-dropping action set pieces, the film also features Simon Yam (Ip Man, Tomb Raider), Lynn Xiong (Ip Man) and Xing Yu (Ip Man, Kung Fu Hustle). This is a sensational mix of twisty heist thriller with high-kicking actioner, as if Ocean's 11 was crossed with Taken, and, with the commanding central presence of a blond, buff Bloom, The Shanghai Job is just the ticket for those in search of stylish, breathless entertainment.

The Shanghai Job is released on EST & VOD on 29th January 2018 and on DVD 5th February 2018 by Signature Entertainment.