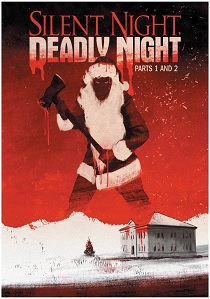 101 Films presents a double serving of Yuletide terror! Highly controversial upon release in 1984, Silent Night, Deadly Night is released on Blu-ray for the first time in the UK 9th November 2020, featuring both the original theatrical cut of the film and the extended cut with standard definition inserts. Also included in this Limited Edition set is 1987 sequel Silent Night, Deadly Night: Part 2.

Young Billy witnesses his parents getting killed by a man dressed as Santa Claus after being warned by his senile grandpa that Santa punishes those who are naughty. Now 18 and out of the orphanage, Billy takes on the role of Santa himself, embarking on a yuletide rampage to "punish the naughty". Santa Claus is coming to town, and this time he's got an axe!

Four years after the events of Silent Night Deadly Night, Ricky Caldwell is being held in a mental hospital, having followed in his brother Billy's footsteps and committed a series of murders. Hell bent on avenging his brother's death, Ricky sets out to continue the family tradition of Christmas carnage.

BD
Packed with twists and turns from beginning to end, starring Matt Damon and directed by Academy Award winner Tom McCarthy, Stillwater is available to own on Blu-ray and DVD 6th December 2021 from Universal Pictures (UK). END_OF_DOCUMENT_TOKEN_TO_BE_REPLACED
Top PicksView