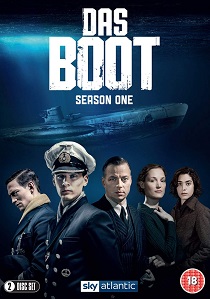 It is Autumn 1942 in occupied France and the U-612 is bracing for its maiden voyage. Led by the young commander Hoffmann, 40 men are heading towards their first ever mission in an increasingly brutal war, all cramped within the metal vessel. Personalities clash and loyalties shatter as they are tried by the unspeakable horrors of war. Will they live to make it back ashore?

Meanwhile, hundreds of miles away, Simone Strasser's world is quickly spinning out of control. Deep into an impossible love affair that has her torn between the two sides, Simone must now navigate a world full of deception and betrayal, all under the watchful eye of the Gestapo's Hagen Forster.

Inspired by Wolfgang Petersen's Oscar and Golden Globe nominated masterpiece as well as Lothar-Günther Buchheim's bestselling novel, Das Boot strikes at the heart of what it takes to endure the torment of a senseless war.

In German with English subtitles, Das Boot: Season One is released on DVD and Blu-ray 25th November 2019 from Dazzler Media.