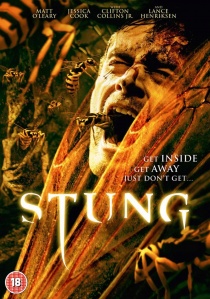 Stung, released on DVD on 26th October 2015 by Entertainment One, is fast-paced horror-comedy that sees a swarm of giant mutant wasps attacks a society garden party. A modern twist on B-movies such as Them! and Piranha, its gory fun and sense of humour will be a huge hit with horror fans and features a cast of up-and-coming talent and genre fan favourite Lance Henriksen.

An upper-class garden party on a country estate turns to bloody chaos when a swarm of mutated wasps descends to feast upon its guests.

But with each victim they consume, the wasps grow bigger and it's only a matter of time before the survivors finds themselves trapped inside a giant nest...

DVD
As a collection of history's worst tyrants and criminal masterminds gather to plot a war to wipe out millions, one man must race against time to stop them in The King's Man, released on DVD, Blu-ray and 4K UHD 28th February ... END_OF_DOCUMENT_TOKEN_TO_BE_REPLACED
Top PicksView