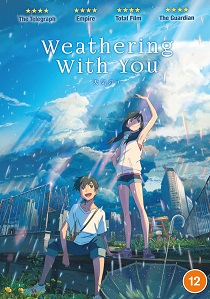 NewsAnimationWorld Cinema
News Article Go back to homepage
A high-school boy who has run away to Tokyo befriends a girl who appears to be able to manipulate the weather in Makoto Shinkai's Weathering With You, released on DVD and Blu-ray 28th September 2020 from Anime Ltd.
Kotaro Daigo, Nana Mori, Shun Oguri, Tsubasa Honda, Yuki Kaji, Kana Hanazawa
Makoto Shinkai
Kôichirô Itô, Genki Kawamura, Wakana Okamura
Anime Ltd
1 hour 54 minutes
28/09/2020
#WeatheringWithYou
Thank you for supporting DVD365.net when you order using the link(s) below. As an Amazon Associate we earn from qualifying purchases
Buy DVD
Buy BD
Information

The creators of Your Name return with the UK box office hit drama that earlier in the year became Japan's first anime entry for the Academy Awards' Best International Feature Film in over 20 years. Now coming to Blu-ray, DVD and a Collector's Edition, the UK critically acclaimed Weathering With You is an uplifting timely arrival for the world we find ourselves in.

Ever since we were swept away by 2016's phenomenal Your Name, the question perched almost nervously on our lips, has been how Makoto Shinkai could top what many consider to be his magnum opus. The answer is a story that both improves on what we love about Your Name, while also crafting an identity that is uniquely Weathering With You.

The sensational animation of CoMix Wave Films returns us to the incredibly detailed and lifelike Tokyo, where even neon lights are reflected in puddles with pinpoint realism. This isn't the same bright metropolis where Mitsuha delighted in upmarket cafés, however. This Tokyo is unforgiving, with its decaying, seedy underbelly on full display. Not being able to go out and play in the sun doesn't mean we can't enjoy those rainy days in though, and the connection forged between Hodaka and Hina in spite of this backdrop, is the film's marvellous rainbow.

Like how Your Name captured Japan's cultural zeitgeist with the backdrop of a natural disaster, the freak rainstorm central to Weathering With You and the story that builds around it taps into the collective consciousness about the ongoing climate disaster. The film also wonderfully blends themes of traditionalism versus modernisation that have been central to Shinkai's other works, creating a detailed, and delightfully complex world that reflects our own.

Weathering With You is released on DVD and Blu-ray 28th September 2020 from Anime Ltd.