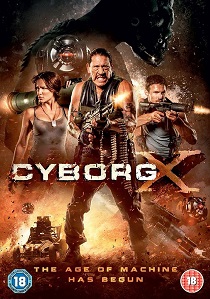 The year is 2018, one year after a ruthless Cyber Virus has infiltrated and seized control of X-Corp, a secretive and advanced weapons manufacturer. Following X-Corp's relentless army of Cyborg and Battle Drones, the world has been destroyed and the human race is close to extinction. Admist the apocalyptic wasteland, Captain Machine Gun (Danny Trejo) must live up to his name as he joins forces with a small number of remaining survivors in a quest to save what's left of mankind. Big guns, counter intelligence and heaps of bullets in tow, the team set off on an epic fighting mission to penetrate X-Corp's head facility and shut the machines down from the source.

The year is 2018. One year after a deadly Cyber Virus has infiltrated and seized control of X-Corp, a top secret and highly advanced weapons manufacturer. Now the world is an apocalyptic wasteland of death and destruction. What's left of the human race is hunted down and destroyed by X-Corp's ground units (an army of Cyborgs and Battle Drones).

In order to save themselves and all of mankind from extinction, a small group of fighters band together in their quest to fight back. Armed with a new piece of counter intelligence, big guns, and lots of bullets, they set off on a suicidal mission to penetrate X-Corp's head facility and shut the machines down from the source. But once inside they soon discover there may be more to the Cyber Virus than initially realized.

UHD
With all the heart and humour audiences expect from Walt Disney Animation Studios, Big Hero 6, released on 4K UHD for the first time 30th August 2021 and exclusive to Zavvi, introduces you to a lovable robot who will change ... END_OF_DOCUMENT_TOKEN_TO_BE_REPLACED
Top PicksView