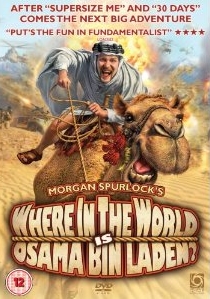 From the director of Super Size Me, Morgan Spurlock, Where In The World Is Osama Bin Laden? is released on DVD from Optimum Home Entertainment on 1st September 2008.

If Morgan Spurlock has learned anything from over 30 years of movie-watching, it's that if the world needs saving, it's best done by one lone man willing to face danger head on to take it down, action hero style.

So, with no military experience, knowledge or expertise, he sets off to do what the CIA, FBI and countless bounty hunters have failed to do: find the world's most wanted man. Why take on such a seemingly impossible mission? Simple - he wants to make the world safe for his soon to be born child. But before he finds Osama bin Laden, he first needs to learn where he came from, what makes him tick, and most importantly, what exactly created bin Laden to begin with.

HotDVDBDUHD
The end of the line is only the beginning in a wild, non-stop thrill ride through modern-day Japan as Bullet Train is released on DVD, Blu-ray and 4K UHD 24th October 2022 from Sony Pictures Home Entertainment END_OF_DOCUMENT_TOKEN_TO_BE_REPLACED
Top PicksView