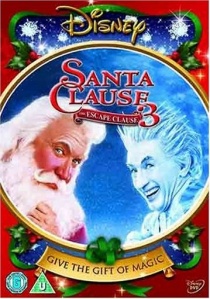 Tim Allen returns to Disney DVD as everyone's favourite Father Christmas in the third instalment of this festive favourite! Packed full of comical capers and heart-warming holiday magic, The Santa Clause 3, released by Buena Vista Home Entertainment on 12th November 2007, is the must-have DVD for the whole family this Christmas.

The next chapter of Santa's saga sees Santa - aka Scott Calvin - working overtime, juggling activities at his workshop while looking after his wife Carol as she prepares to give birth to Baby Claus. When Carol's parents come to stay, Scott also has to try to conceal his true identity with comical results.

Meanwhile, the mischievous Jack Frost (Martin Short) plans to take over Christmas, steal Santa's job and make it a Merry Frostmas and a Jackie New Year! After tricking Santa into saying the Escape Clause, hilarious consequences ensue when Jack and Santa are catapulted into a world in which Jack Frost rules Christmas and Scott still works for his old company.

The entertainment continues with a stocking full of exciting DVD extras including the fantastic Christmas Carol-oke, The New Comedians: On The Set With Tim and Marty, bloopers and much more.

Colourful and bright, funny and witty, it's a magical fantasy that will please young and old. Guaranteed to bring some early Christmas magic and family fun to any home, fans won't want to miss the biggest festive film of the year when The Santa Clause 3: The Escape Clause is released on Disney DVD and Blu-ray Disc on 12th November.

Tim Allen reprises his role of Scott Calvin - AKA Santa - as he juggles a full house of family and the mischievous Jack Frost who is trying to take over the 'big guy's' holiday. At the risk of giving away the secret location of the North Pole, Scott invites his in-laws to share in the holiday festivities, and upcoming birth of baby Clause with expectant wife, Carol - AKA Mrs Clause. Along for the adventure are Scott's extended family, son Charlie, ex-wife Laura Miller, her husband, Neil Miller and their daughter Lucy who, together with head elf Curtis, foil Jack's craft scheme to control the North Pole. 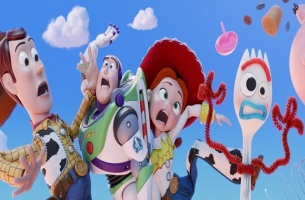 DVD
Two lifelong friends find themselves at an impasse when one abruptly ends their relationship, with alarming consequences for both of them in The Banshees Of Inisherin, released on DVD and Blu-ray 30th January 2023 from Walt ... END_OF_DOCUMENT_TOKEN_TO_BE_REPLACED
Top PicksView