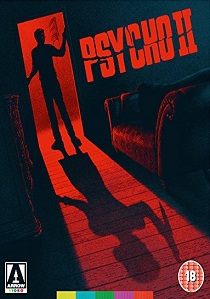 NewsHorrorThriller
News Article Go back to homepage
Just when you thought it was safe to step back in the shower, Norman Bates returns in Psycho II, the expertly crafted sequel to Alfred Hitchcock's acclaimed horror classic, re-released on Blu-ray with a new transfer by Arrow Films on 31st July 2017.
Anthony Perkins, Vera Miles, Meg Tilly, Robert Loggia, Dennis Franz, Lee Garlington
Richard Franklin
Hilton A. Green
Arrow Video
1 hour 53 minutes
31/07/2017
#Psycho2
Thank you for supporting DVD365.net when you order using the link(s) below. As an Amazon Associate we earn from qualifying purchases
Buy BD
Information

Just when you thought it was safe to step back in the shower, Norman Bates returns in Psycho II, the expertly crafted sequel to Alfred Hitchcock's acclaimed horror classic, re-released on Blu-ray with a new transfer by Arrow Films on 31st July 2017.

Deemed fit to return to society more than two decades years after his original crimes, Norman Bates has returned to his family mansion and adjacent motel. Joined by an unlikely house guest in the form of young Mary (Meg Tilly), things seem to be looking up for Norman until the grisly murders start up afresh. Has Norman really put his terrible past behind him, or is he losing his grip on sanity all over again?

Aided by a fiendishly clever script from Fright Night director Tom Holland, Psycho II is regarded by many as one of the most successful horror sequels of all time, with a plot that will keep you guessing until the very end...

HotUHD
StudioCanal is thrilled to announce that the iconic cult classic, Highlander, is being released to own on 4K UHD for the very first time 31st October 2022 with brand-new artwork from celebrated artist Matt Ferguson. END_OF_DOCUMENT_TOKEN_TO_BE_REPLACED
Top PicksView