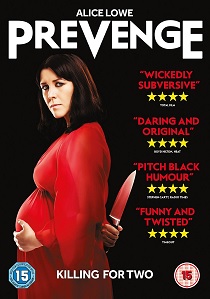 A pitch black, wryly British comedy from the mind of Alice Lowe (Hot Fuzz, Kill List, Sightseers, The World's End), Prevenge follows Ruth, a pregnant woman on a killing spree. It's her misanthropic unborn baby dictating Ruth's actions, holding society responsible for the absence of a father. The child speaks to Ruth from the womb, coaching her to lure and ultimately kill her unsuspecting victims.

Struggling with her conscience, loneliness, and a strange strain of prepartum madness, Ruth must ultimately choose between redemption and destruction at the moment of motherhood.

Having shown at Venice, Toronto and most recently the London International Film Festival, Prevenge marks the directorial debut from Lowe, who is a true triple threat, writing, directing, and acting in the film during her own real-life pregnancy.

Prevenge is released on DVD and Blu-ray 5th June 2017 from Kaleidoscope Home Entertainment.

BD
A stellar cast sizzles in Heat, a taut psychological drama about an obsessive detective and a brilliant thief whose fates are linked in the aftermath of a high-stakes securities heist, released on 4K UHD 8th August 2022 from ... END_OF_DOCUMENT_TOKEN_TO_BE_REPLACED
Top PicksView