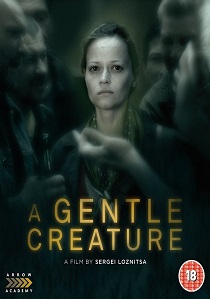 Nominated for the Palme d Or at the 2017 Cannes Film Festival, A Gentle Creature, released on Blu-ray 20th August 2018 from Arrow Academy, is the third fiction feature by Ukrainian filmmaker Sergei Loznitsa (In the Fog, Donbass).

Loosely adapted from the short story by Fyodor Dostoevsky, the film concerns the gentle creature of the title, played by Vasilina Makovtseva. A parcel sent to her imprisoned husband is returned undelivered, prompting her to travel from her rural home to the remote region in Siberia where he is being held in the hope of an explanation. But this seemingly simple task becomes an infinitely difficult challenge taking on Kafkaesque proportions.

Beautifully shot by Oleg Mutu, a key figure in the Romanian New Wave whose credits include The Death of Mr. Lazarescu and 4 Months, 3 Weeks and 2 Days, and powered by a stunning performance from Makovtseva, A Gentle Creature is a riveting, brutal, but blackly humorous masterpiece.

DVD
For the first time in the cinematic history of Spider-Man, our friendly neighborhood hero's identity is revealed in Spider-Man: No Way Home, released on DVD, Blu-ray and 4K UHD 4th April 2022 from Sony Pictures Home ... END_OF_DOCUMENT_TOKEN_TO_BE_REPLACED
Top PicksView