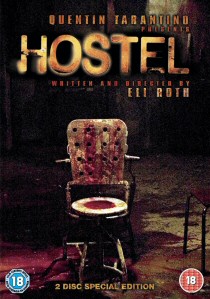 To coincide with the theatrical release of Hostel II, Sony Pictures Home Entertainment presents the Hostel Special Edition, available to buy on double disc DVD from 18th June 2007. Directed by Eli Roth (Cabin Fever, Hostel II) and produced by Quentin Tarantino (Grindhouse, Kill Bill), Hostel is a frighteningly gruesome experience and this Special Edition ratchets up the level of terror, making it a must have for all serious horror fans.

Starring Jay Hernandez (Ladder49, World Trade Centre) and Derek Richardson (Dumb and Dumberer, Bring It On Again), the story follows three backpackers in Amsterdam who seek the ultimate vacation of getting high and getting laid. When a friendly stranger tells them about a hostel in Slovakia where the women are unbelievably beautiful and just love Western men, they don't need to be asked twice. The three excited friends head off to find the hostel "to die for". But what seems on the surface to be their idea of heaven soon becomes a living hell as the hostel is hiding a dark and terrible secret.

This blood curdling two-disc Special Edition comes with horrific new 'Dungeon Deluxe' packaging, behind-the-scenes featurettes and a whole host of extra material, making it the perfect way for fans to refresh their memories before the all-new and even more graphic horror of Hostel II makes them squirm all over again when it opens theatrically.