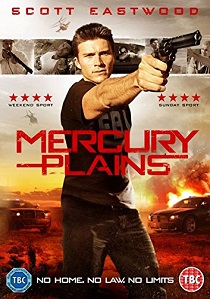 Hollywood's latest action hero proves the apple doesn't fall far from the tree as Mercury Plains explodes onto DVD with the Eastwood dynasty going from strength to strength on 2nd May 2016, courtesy of Signature Entertainment.

Mitch (Scott Eastwood - Suicide Squad, Fury) is a troubled young man who leaves his dead-end life behind when he hightails it to Mexico. There, he's recruited by a mysterious figure to join a group of paramilitary teenagers who take the fight against the drug cartels directly to the source. At their desert camp, Mitch finds himself being groomed to be the team's top operative at the same time as their campaign against the drug lords ramps up a gear. As the raids become bloodier and the Mexican police are closing in, Mitch realizes that his only way out is to escape back to the USA.

With Eastwood effortlessly channelling his father Clint's early charisma and being just as easy on the eye, Mercury Plains plays out as a smart companion piece to this year's Sicario, albeit with a hugely attractive, much younger cast. The perfect Friday night fodder that captures Eastwood's star in the ascendant, Mercury Plains is essential.

UHD
Pixar Animation Studios presents Cars, the high-octane adventure comedy that shows life is about the journey, not the finish line, zooming in for the first time on 4K Ultra HD 19th July 2021, exclusive to Zavvi. END_OF_DOCUMENT_TOKEN_TO_BE_REPLACED
Top PicksView