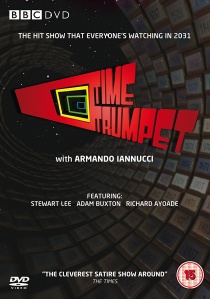 Time Trumpet, the cult comedy series from Armando Iannucci, the man at least partly responsible for The Day Today, Alan Partridge and The Thick of It is released on DVD for the first time on 27th April 2009 from 2entertain. Set in the future, this BBC sketch show looks back at the key events, celebrities and television shows of the early 21st century.

The year is 2031. It's an era of unparalleled progress (apart from the two billion people wiped out by flooding). Meat is used as a source of energy and special airlines even allow animals to migrate comfortably by commercial flight. But what was life really like in the early years of the 21st Century?

Politics, sport, television and celebrity all come under the spotlight as we remember how the War on Terror was won, Tesco's invasion of Denmark, the Royal Referendum, Bob Geldof's Concert to End Death, Charlotte Church vomiting herself inside out, Children's plastic surgery show Spicy Slicey, the live Cilla autopsy, Honey, I Shrunk Martha Kearney, outrageous cult TV success, Rape an Ape and other momentous events.

The review is helped along by television clips, interviews with older versions of Seb Coe, Charlotte Church, Ant and Dec, Bob Geldof, Jamie Oliver, David Beckham, Anne Robinson, David Cameron and other wrinkly but familiar faces, as well as the promise of an interview with an increasingly odd, ageing Tom Cruise... 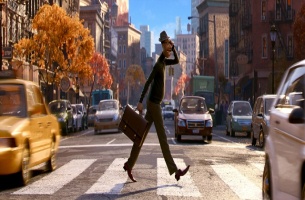 UHD
Doctor Strange teams up with a mysterious teenage girl from his dreams who can travel across multiverses in Doctor Strange in the Multiverse of Madness, released on DVD, Blu-ray and 4K UHD 18th July 2022 from ... END_OF_DOCUMENT_TOKEN_TO_BE_REPLACED
Top PicksView