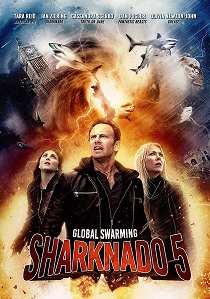 Pack your passport and grab a chainsaw, because SYFY's Sharknado is going global! Taking the world - and unsuspecting celebrities - by storm, as the movie event of the century blows into town.

Sharknado 5: Global Swarming and the film's official tagline, "Make America Bait Again!", are the result of a fan-sourced social initiative. Calling on fans for inspiration, SYFY invited Facebook users to submit their most creative and outrageous ideas via an interactive bot.

In Sharknado 5: Global Swarming, the mission gets personal for Fin Shepard (Ian Ziering) and his bionic wife, April (Tara Reid) when their young son gets trapped in a traveling 'nado and transported all over the world. From London to Rio, Tokyo, Rome, Amsterdam and beyond, our globetrotting heroes will seek assistance from a highly-skilled squad of royals, scholars and Olympians, enlisting famous faces from news, entertainment, and sports in their most epic battle yet.

HotUHD
Just as relevant and incendiary now as it was three decades ago, King of New York returns 16th November 2020 on 4K UHD with guns blazing in this definitive special edition from Arrow Video, including a new director-approved 4K restoration. END_OF_DOCUMENT_TOKEN_TO_BE_REPLACED
Top PicksView