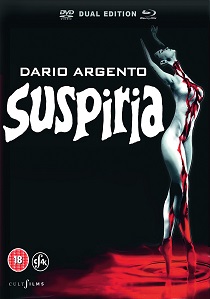 Considered the most famous Italian horror film of all time for its vivid, groundbreaking style and jaw-dropping bloodshed, now, to celebrate Suspiria's Fortieth Anniversary, CultFilms is proud to terrify audiences once again with the dazzling 4K restoration of Dario Argento's groundbreaking horror masterpiece, released on dual-format DVD and Blu-ray 4th December 2017.

Ballet student Suzy Bannion (Jessica Harper) arrives at a prestigious dance academy in Freiburg, a school plagued by gruesome and supernatural happenings. Soon students begin to die in horrific circumstances is Suzy next, and can she uncover the academy s sinister secret before it s too late?

Argento carved a Baroque Expressionist nightmare, saturated with expressionist colours and punctuated by shocking violence. His monumental, epoch-making cinema-redefining visual and aural assault on the senses has become the reference by which all horror genre is measured and its creator, director Dario Argento can now truly be seen as one of the important artists of the 20th century..

Now finally presented for the 1st time ever according to the director's original vision: the 4K scan was restored painstakingly by the applauded TLE Films (who did the Clint Eastwood Dollar Trilogy among others) with that crucially distinct colour palette reinstated in accordance with Argento's original specification.