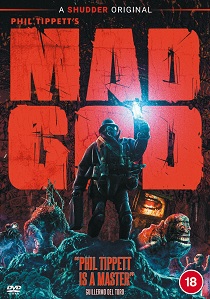 The most watched Shudder premiere of 2022 - and certified fresh with a 92% rating - this critically-acclaimed and mind-blowing chef-d'oeuvre was 30 years in the making and has earned plaudits around the globe for its creative genius, cinematic originality, and inspired grit.

Having collected five awards, including Winner of 2021 Fantasia Film Festival's Most Ground-breaking Film and Best Animated Feature and the 2021 Sitges Award for Best Visual Effects - this expertly crafted and exquisitely imagined Shudder Exclusive is now set to delight fans with its release on Blu-ray, DVD and digital on 5th December 2022, courtesy of Acorn Media International.

Equipped with a gas mask and a crumbling map, the Assassin, an iron-clad humanoid, descends into a rusty, peril-laden underworld of grime, blood, tortured souls, decrepit bunkers and unsettling monstrosities forged from the most primordial horrors of the subconscious mind.

As the stealthy invader meanders through the labyrinthine post-apocalyptic wasteland on a mysterious mission, going deeper and deeper into the nightmarish realm, he eventually reaches his destination... the heart of this grotesque tower of torture. But what awaits him there?

Crafted by the world's pre-eminent stop-motion animator, every set, creature, and effigy in this macabre masterpiece is hand-crafted and painstakingly animated using traditional stop-motion techniques.

The result? A striking, haunting, halogenic, and hellish stop-motion spectacle unlike any other.

Descend into unimaginable depths and get ready to meet your maker, Mad God - a gorgeously gruesome cinematic frenzy that deserves every ounce of praise it receives.