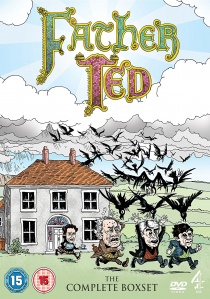 From award-winning creators Graham Linehan & Arthur Mathews and starring Dermot Morgan as the eponymous Father Ted Crilly, the brilliant and much-loved comedy, Father Ted, is now available to own on complete box-set from 5th November 2012.

First screened in 1995, the four-time BAFTA award-winning Father Ted tells the hilarious tale of three Irish priests and their housekeeper. Life is hard for Ted. Exiled to the remote Craggy Island (for reasons which never quite become clear but may have something to do with missing Church funds), he is forced to share a house with three of the most difficult people in Ireland...

First there's Father Jack (Frank Kelly), who has not been sober since 1936 and has a vocabulary which extends to three words - only two of them printable. Then there's Father Dougal (Ardal O'Hanlon) : young, innocent and almost inconceivably stupid. And finally, Mrs Doyle (Pauline McLynn) the overly-attentive housekeeper who has one sole purpose in life - to supply the priests with cups of tea, usually against their will. Will the four of them ever be able to live in faithful harmony?

Comprising every episode across all the three series, this laugh-out-loud comedy classic is also loaded with hilarious extras; including brand new commentaries with Graham Linehan & Arthur Mathews and the Channel 4 documentary, Small, Far Away - The World of Father Ted, following Graham and Arthur as they return to Craggy Island for a road trip on the 15th anniversary of the show's launch.

And for Father Ted's festive treats, bag yourself the Father Ted Christmas Special, 'A Christmassy Ted' - also available to own on DVD from 5th November 2012.

DVD
Fast forward to the 1980s as Wonder Woman's next big screen adventure finds her facing a wide array of foes including Max Lord and The Cheetah as Wonder Woman 1984 flies in on Blu-ray and 4K UHD 22nd ... END_OF_DOCUMENT_TOKEN_TO_BE_REPLACED
Top PicksView