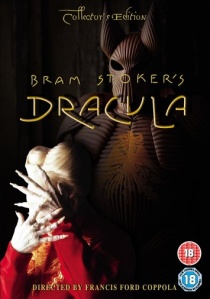 One of the most popular and critically acclaimed versions of gothic masterwork Bram Stoker's Dracula is released to buy as a new Deluxe Edition DVD from 22nd October 2007, courtesy of Sony Pictures Home Entertainment.

Directed by the legendary Francis Ford Coppola (Apocalypse Now, The Godfather Trilogy) and featuring a stellar line-up that includes Anthony Hopkins (The Silence Of The Lambs, Proof), Keanu Reeves (The Lake House, The Matrix) and Winona Ryder (Mr Deeds, A Scanner Darkly), the film takes the love story at the heart of Stoker's novel and gives it a stunningly realised modern gloss thanks to Gary Oldman's (Immortal Beloved, Harry Potter And The Order Of The Phoenix) mesmerising turn as the eponymous vampire driven mad by his hunger for the innocent Mina.

This stunning new two-disc Deluxe Edition features great new packaging and an array of extra material, such as a commentary and an array of featurettes. With Stoker's source material still proving as popular as ever, this really is the version of a great film people have been waiting for.