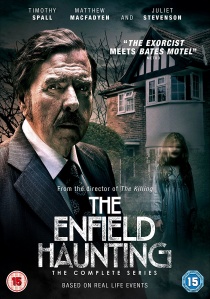 In a seemingly normal house in Enfield, north London, a series of disturbing paranormal events have begun to take place. Reports of an unworldly presence making repeated attempts on the life of 11-year-old Janet Hodgson soon attract the attention of paranormal investigator Maurice Grosse (Timothy Spall; Harry Potter, Mr Turner, Lemony Snicket's A Series of Unfortunate Events) who is convinced that the house is plagued by a poltergeist. With the attacks growing increasingly violent by the day Maurice will stop at nothing to protect Janet from these strange and dark forces.

Chilling and terrifying, The Enfield Haunting is the unmissable true story of the most documented and shocking poltergeist incident in modern history.

UHD
Based on the global blockbuster videogame franchise from Sega, Sonic The Hedgehog, released on DVD, Blu-ray and 4K UHD from 8th June 2020 from Paramount Home Entertainment, tells the story of the ... END_OF_DOCUMENT_TOKEN_TO_BE_REPLACED
Hot PicksView