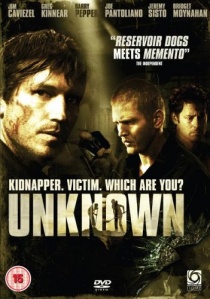 After a violent scuffle in a remote warehouse, a barrel of a noxious chemical is spilled. The five men in the room awaken with blank slates, unaware of even their own identities. It is clear they have experienced some traumatic event: one is bound to a pole, one has had his face smashed in, another is handcuffed to a pipe...

But no one remembers who they are or what they're doing there. As the men slowly try to assemble the puzzle of their last few hours, the conflicts and challenges begin. How do you know who to trust, if you don't even know who you are?

BD
Will Smith and Martin Lawrence are back on the case in the roles that launched the dynamic duo to global superstardom in Bad Boys For Life, arriving on DVD, Blu-ray and 4K UHD 25th May 2020 from Sony ... END_OF_DOCUMENT_TOKEN_TO_BE_REPLACED
Hot PicksView

DVD
30/09/2020
The spine-tingling killer croc thriller Black Water: Abyss arrives to terrorise everyone at home as a digital download and DVD on 2nd November 2020 from Altitude Film Entertainment.