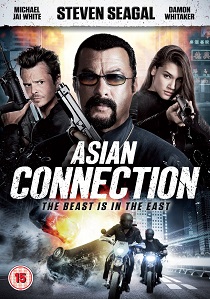 Two small-time criminals, Jack (John Edward Lee) and Sam (Byron Gibson), unwittingly steal a drug lord's money when they rob a series of banks in Southeast Asia. But when Sam is killed, Jack teams up with his girlfriend Avalon (Pim Bubear) and they flee to Thailand, becoming a Bonnie and Clyde bank-robbing duo.

Things change when Jack is targeted by the gang's mob boss Gan Sirankiri (Seagal), who's put a bounty on his head. But he's offered a way out when Sirankiri's second-in-command Niran (Sahajak Boonthanakit) gives him an ultimatum: rob banks for him or face the mob boss's wrath... leading to an explosive conclusion.

HotDVDBD
From the producers of Nobody and John Wick comes a bare-knuckle, coal-dark holiday action-comedy that says you should always bet on red as Violent Night sledges in on DVD and Blu-ray 6th March 2023 from Warner Home Video. END_OF_DOCUMENT_TOKEN_TO_BE_REPLACED
Top PicksView