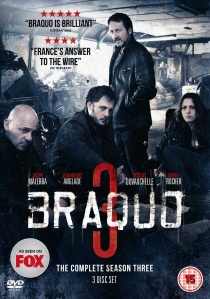 Following its acclaimed run on the Fox channel, Arrow Films' Noir Label is pleased to announce that the long awaited third season of French cop-thriller Braquo will be released as a DVD Box Set on 21st July 2014.

Since the first two seasons were shown here in 2012, fans have been left guessing as to what creator Olivier Marchal, himself a former Parisian policeman, has in-store for Eddy Caplan and his team. Hailed as one of the most gripping and brutal police series of the last decade, Braquo has mesmerised UK viewers with its violent and realistic story-lines.

Jean-Hugues Anglade (Nikita, Betty Blue) returns once again as the enigmatic Eddy Caplan to lead his renegade squad of Parisian detectives as they fall yet further in the eyes of the law.

With Theo somewhere between life and death, Caplan and his team are in a state of shock. What's left of the original squad is more shattered than ever before, trying their best to cope with the situation. Thirsty for revenge and for recognition alike, the rogue cops still have a job to do: a major trafficking operation, orchestrated by the powerful Eastern mafia, has to be stopped.

Eddy, Roxanne and Walter are thrown into the middle of a gruesome gang war between Russian-speaking mobsters. As for internal affairs investigator Vogel, he lurks in the shadows, ready and waiting to strike in the hope of finally getting rid of Caplan for good.

Season 1 begins as Caplan is tasked with lifting the team in the wake of his bosses' suicide. Adapting to life with Caplan in charge, we're introduced to Walter Morlighem, Roxanne Delgado and Theo Vachewski, enforcers who exist in the blurred boundaries at the very edge of the law, often using violence and intimidation in order to get the job done.

For Season 2, creator Olivier Marchal joined forces with Abdel Raouf Dafri, the French writer behind A Prophet and Mesrine, with the results darker, grittier... and a lot more violent. Having been demoted, reassigned and even fired from the force thanks to their escapades in the debut series, is the game finally up for the hard-hitting cops?

BD
A 13-year-old girl named Meilin turns into a giant red panda whenever she gets too excited in Disney and Pixar's 25th feature film Turning Red, released on DVD, Blu-ray and 4K UHD 2nd May 2022 from Walt Disney Home ... END_OF_DOCUMENT_TOKEN_TO_BE_REPLACED
Top PicksView