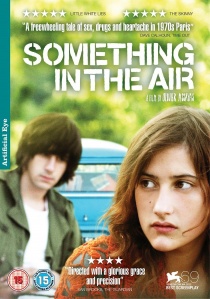 Following his success with Summer Hours and Carlos, acclaimed director Olivier Assayas turns his attention to Paris in the early 1970s with this freewheeling and mesmerising portrait of the years that changed it all with Something In The Air, released on DVD and Blu-ray on 26th August 2013, courtesy of Artificial Eye.

After the May '68 protests, Gilles, a young Parisian student, is taken in by the political and creative turmoil of the times. Through a haze of wild parties, social activism and romantic encounters, he and his friends partake in some of the most defining moments of the post-war period. But as the weight of reality pushes down on them, issues of personal responsibility and the nature of idealism will cause them to question their actions and future plans.

UHD
After more than thirty years of service as one of the Navy's top aviators, Pete 'Maverick' Mitchell is back where he belongs as Top Gun: Maverick flies onto DVD, Blu-ray and 4K UHD 31st October 2022 from Paramount Home ... END_OF_DOCUMENT_TOKEN_TO_BE_REPLACED
Top PicksView